Rubber comes in many varieties that have greatly differing properties. You can use the guides below to help determine the best type for your product or project needs. If you have any technical questions please feel free to contact us.

NR, or Natural Rubber sometimes called “india rubber” is a visco-elastic material consisting of a natural organic compound called polyisopreme as well as, others organic compounds including water. This material is an elastic polymer or elastomer derived from natural latex from certain plants and trees. Natural rubber has an excellent and long flex life with high tensile strength and can come in a wide range of hardness for various applications. Despite its extreme flexibility and stretchable properties it is subject to weathering and has a poor resistance to heat oil and ozone despite being generally waterproof.

NBR – Nitrile butadiene rubber is a family of synthetic rubber copolymers derived from 2-propenenitrile and various butadiene monomers. The physical properties of each specific family member varies but these forms of synthetic rubbers are generally resistant to attack from oils, minerals, fuels and solvents and offers a fair resistance to heat and aging. The varying ratio of nitrile within the polymer can change the characteristics. The more nitrile used the higher it’s resistance to oils but the flexibility of the material suffers. NBR is used throughout a wide range of industries and in the manufacture of countless products.[clear]

EPDM (ethylene propylene diene monomer) is a type of synthetic rubber that is an elastomer and us used in a very wide range of applications. This material has a satisfactory compatibility with fireproof hydraulic fluids, ketones, hot and cold water and alkalis and it has an unsatisfactory compatibility with most oils, gasoline, kerosene, aromatic and aliphatic hydrocarbons, halogenated solvents and concentrated acids. EPDM has outstanding heat, weather and ozone resistance and also has good resistance to polar substance as well as steam. It’s excellent electrical insulating properties are also helpful in certain applications which require such a feature.[clear]

Neoprene / Polychloroprene sometimes called chloroprene rubber is a synthetic rubber created by linking together single molecules of chloroprene.  Chloroprene is colorless, toxic and flammable liquid which has several modern production processes for the creation of CR. The result is a well-rounded, general purpose rubber with a high tensile strength and resilience along with oil and flame resistance.  It also has a resistance to oxygen and ozone and good weather resistance.[clear] 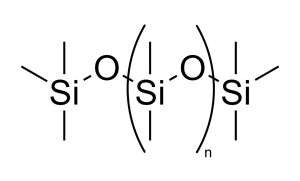 Silicon Rubber is an elastomer that is composed of silicone, carbon, hydrogen and oxygen. These rubbers are often one or two-part polymer based and are generally stable and non-re-active with good resistance to extreme environments and temperatures from −55 °C to +300 °C while still retaining useful properties. This material has a broad range of uses because of this stability and its ability to be easily shaped and formed into application specific designs. Depending on the end use heat or vulcanization may be required to cure the silicone into its final rubber form.[clear]

FKM is a designation for about 80% of the fluoroelastomers as defined in the ASTM (American Society for Testing and Materials). All FKMs contain vinylidene fluoride as a monomer. Fluoroelastomers are more costly than neoprene or nitrile rubber in part because they provide additional heat and chemical resistance. They also have excellent hot oil, aliphatic and aromatic hydrocarbon resistance. There are different classes of FKMs based on their chemical composition, fluorine content or crosslinking mechanism.[clear]

SBR or Styrene-butadiene rubber is a family of synthetic rubbers derived from styrene and butadiene. These rubbers have good abrasion resistance and good stability with aging over time when protected by additives. The ratios of styrene / butadiene change the properties of the material. Higher levels of styrene are less elastic and flexible than other versions.[clear]

Polyeurethane is a polymer composed of a chain of organic units and joined by carbamate (urethane) links. This material combines the best properties of rubber and plastic and is used in the manufacture flexible, highly-resilient gaskets, bushings and other products throughout various industries. Additionally, polyeurethane can withstand extreme temperatures and is very oil and fuel resistant.[clear]

Viton is a brand of synthetic rubber is a fluoropolymer elastomer commonly used in o-rings and other molded or extruded products. This material can stand extreme temperatures and is fuel and oil resistant. Because of these qualities Viton is used in many industries to create tubes and hoses and certain types of the material are more resistant to acidic biodiesel. It is incompatible for use with ketones, acetone and organic acids such as acetic acid.[clear]